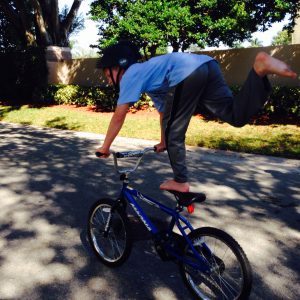 If you’re a mom like me with young kids at home, you can’t even think about New Year’s Resolutions until the sweet sound of the school (late) bell chimes. Today, Tuesday, was my January 2nd, having spent all of my January 1st attempting this new-fangled activity people call “exercising.” I blogged today because the few areas of my body not experiencing pain are my fingertips.

I first sat and listed all of the common resolutions which include, but certainly aren’t limited to: running, weightlifting, dieting, organizing my life (specifically my shoes), letting go of negativity, remaining consistent, quitting running, ditching weightlifting, accepting mess, buying more shoes, and embracing my bitchiness, all with consistency.

I chose not to make any parenting resolutions because unless I resolve to quit torturing myself about my horrible parenting choices I’d be wasting my time. And then what would I have left to write about? What I have thought a lot about recently are a few of my son’s behaviors, byproducts of that “blessing” called autism. And I hereby vow to not touch them. Why? I’ve said it before and I’ll say it again: autism sucks ass; however, parenting a child with autism has taught me countless, invaluable life lessons. Not to mention a lot about Mickey Mouse Clubhouse, Thomas the Train, sea animals, Australia, and my son’s latest obsession- mastering the pogo stick. So what will I allow J.R. to continue to obsess over in 2015? Here you go; don’t judge:

1.  Naming everything. The second J.R. takes possession of something, whether it be a stuffed toy or ingrown toenail, he slaps a name on it. Oh and God forbid my husband and I don’t keep a mental list of the hundreds (no I am not kidding) of monikers he includes in his lexicon of items he holds dear. Also, guessing is totally out of the question. For example, the other day he was desperately trying to find one of the no less than seventy toys with whom he shares the tub. The instant my mouth initiated the phoneme “d” I was verbally attacked. “HIS NAME IS NOT DUCKY. HIS NAME IS MR. QUACKERSSSSSSSSSSSSS!!! AND HE IS MISSING!!!!!!!!!!!!!!!!!!!!!” Yikes. Having to juggle the names, nicknames, aliases, birth signs, family histories, likes, and dislikes of every object J.R. crushes on can be exhausting. The fact that that Eve (hippie Lego Minifigure) and Linguini (surfer Lego Minifigure) are in love but Miz Snoots (the stuffed cow) can’t be in the same room with Nutley (the stuffed squirrel) only reminds me of how far J.R. has come. Flash back nine years ago when my husband and I were trying to figure out what the hell went wrong with our baby boy. Amongst the handful of answers I couldn’t accurately supply to his many evaluators, my response to does J.R. engage in creative play? has always stuck in my mind.

“Mommy, does J.R. (a 15 month-old boy) ever try to feed his dolls?” asked the childless child psychologist.

“Um, no, but he loves cars and busses and taxis and unicycles and…” I replied with enthusiasm.

I now know that believing this common autistic trait of staring at spinning wheels was “creativity” was about as “creative” as assuming we parents weren’t spinning our own. Today, J.R.’s name game shows me that he can engage in such important play. It has shown us that J.R. recognizes and cares about relationships. J.R. has concern for the well being of those around him, even if they are made in China. And I know that he practices this life skill toward humans. My goodness if you could only see the way he beams at the sight of his grandpa (and scowls at his presence of his brother). Have I mentioned how many human girlfriends J.R. is juggling at the moment? Yeah, you know who you are.

2.  Attempting any and every task at lightning speed, barefoot. My furniture and wall color can attest to the fact that I am raising a child with autism. If I call J.R. to dinner (okay maybe dessert), you’ll hear every solitary movement he makes between his bedroom (including dropping a named toy like a two-ton hot potato) and the kitchen table. That sound of a herd of elephants charging down the stairs, slamming into the wall at the landing, then barreling down again toward the tile floor? That’s J.R. Who clocks 70 MPH on his Huffy then ditches his brakes for his calloused heels a-la Fred Flintstone? J.R. I’d like to convince myself that these behaviors don’t simply put J.R. into the category of “sensory seeker.” I’d rather just chalk it up to boyhood, and call it a (fantastic) day. I say this because his neurotypical younger brother is tailing him, screeching “Wait for meeeeeeeeeee!” Who needs nice furniture anyway?

3.  Dreaming big. To say that J.R. doesn’t understand limits would be the understatement of the year, and I can confidently proclaim that just six days into 2015. His ipad volume has one setting: earbleed. His Finding Nemo movie has replaced its “New on DVD” intro sequence with “Really, J.R. ? Nemo AGAIN?” I will hand it to him though; J.R. is a man of his word. “Mom, today I am going to be a daredevil” is a promise. Cue J.R. speeding down the street on his bike again, this time standing with one foot on his seat and the other in the air. J.R. wanted to become a father so badly that he adopted a sea turtle. He didn’t even fuss that Reef already had a name. I don’t know how the boy does it but everything he wishes for, he makes happen. Actually, mom, dad, grandma, grandpa, and Santa Claus make most things “happen.” Nevertheless, I have a fearless dreamer on my hands. And I couldn’t care less how high his head sits in the clouds.

Happy New Year everyone.  Let’s make this one great!

Kristi Vannatta is a mom to two boys, ages seven and ten, and also lives in South Florida.  Her blog, Write On!, focuses on her life with her ten-year-old son with autism.  In her infinite spare time (ha!) she runs Puzzle Peace Now, a charity that raises money to send children with autism to summer camp.