I had never felt more emotionally exhausted in my entire life, nor had I felt more blonde. As I yank J.R. across the threshold and quickly slam the door behind us, I stupidly wonder if other parents have it this hard. Do they also worry their kid will dart off into traffic in the time it takes to reposition his newborn brother’s pacifier? Hmmm. Puzzling. Even still, I continue to go over the oh-so-popular autism warning signs checklist in my head, ad-nauseam. You know, the one the therapist handed to me, covered in checks? When would I see the writing on the wall? Maybe it would become visible after I cleaned the poop off?

Clueless, I hadn’t done the “ugly” cry just yet. I can’t wrap my tiny mind around what is happening. Some call it denial, but if I recognize it as such, I wouldn’t be in denial then would I? The package. After my boys are safe inside (a relative term) I grab the bag, the contents of which had obviously been compiling for some time. How else was my best friend able to create a four-inch binder, containing hundreds of sheets printed from internet websites, all in the time it took me to call her on the way home from the therapist’s office? Twenty minutes ago. The plot thickens. And then there are the books. There are at least six here and are all on the topic of J.R.’s specific diagnosis, the now defunct (translation: bullshit) PDD-NOS. I don’t recall their titles, but they may as well have been collectively given the subtitle Just Give Up Now. I open the one with a picture of a very, very sad looking teenage boy on the cover, mostly because I can’t look at him anymore. Who in the hell designed that? Did the photographer actually say don’t smile? I digress. This trash also offers a checklist, but it’s a bit more detailed. I scan the page and feel myself mouth yadda yadda yadda until I come across the most heinous words ever written. I can’t quote directly because I instantly formed a mental block in order to avoid slipping into a coma upon accidentally reading for the second time. To sum it up, it states that if your kid has autism, he’ll never understand humor. What? Effing what? Put a fork in me; I’m done. Apparently Lloyd Bridges and I both picked the wrong day to quit sniffing glue.

I cried and cried and cried. And cried some more. I would never accept this “fact.” Ever. Why? Because autism is 100% a genetic disorder (insert present day sarcasm) and I am the funniest person who has ever lived.   This. Is. Literally. Impossible. J.R. is a riot. I think. Isn’t he?

Focus Kristi, focus. I know in my heart that our road ahead will be long, but if it isn’t paved in standup by the likes of Eddie Murphy (specifically, Raw), Brian Regan, Jim Gaffigan, or Dave Chappelle I don’t want to live anymore. Just have Leslie Neilson fly me straight to heaven in his Airplane while everyone else whistles Dixie out of their assholes. And for the record, if John Cleese isn’t God, nor heaven a flying circus, I choose hell.

Nature, meet nurture. You’re about to get married. J.R. will be funny if it kills me.

You’ve read my blog. It’s safe to say that J.R. and I have had a lot of laughs together over the years. Or have we been simply laughing at one another? I’ve exposed him to plenty of hilarity, just by playing the role of mom. Maybe every boy, autism or no autism, thinks (wet) burping and (wet) farting is a riot.  As a last resort I can provide photo evidence. J.R. looks like he’s about to bust a gut in each and every picture of him I own. Well, at least in the few I haven’t deleted. Let’s say for shits and giggles that in the past I was in fact in denial about successfully raising the next Benny Hill. My early Valentine’s Day gift, however, confirms that J.R. can make other people laugh. And not just at him.

Last week J.R. was assigned James Patterson’s novel I Funny: A Middle School Story. I could dig that, essentially because the book is jam-packed with illustrations. Seriously, I adore this book. Jamie Grimm, a wheelchair bound middle schooler, doesn’t take his sucky situation sitting down. Well, he kinda does, admittedly. Nevertheless Jamie fends off both bullies and his sad past with humor. And so successfully that he bravely enters a contest called The Planet’s Funniest Kid Comic. I want to jump onto the page and adopt this boy. For him, comedy is the great equalizer. What a concept. 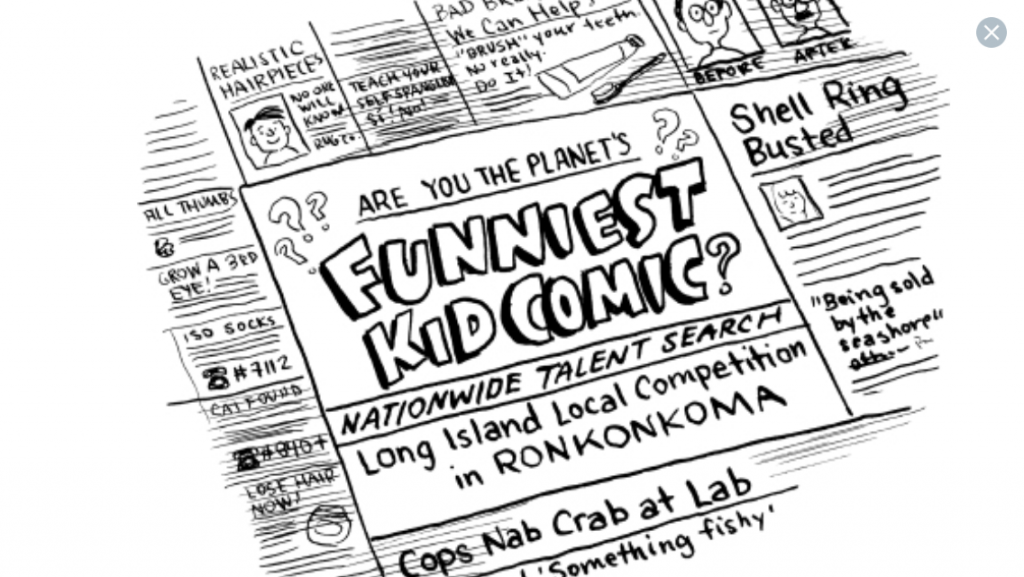 True to form, J.R.’s teacher promptly assigned a project that Mel Brooks could only describe as N-V-T-S, NUTS! He was to perform a stand up comedy routine in front of the entire class. At least my reaction to every autistic ten-year old’s dream assignment was appropriate. It went something like this:

The funniest part? He dove right in and I was in total shock. Let’s be truthful, it took us a while to skim through his baby brother’s fifty joke books to find a handful that weren’t over his head. Yet while we practiced his delivery (a whole two times due to the “gift” of a photographic memory) J.R.’s teacher reported that he was excited about the gig. I prayed there were no tomatoes available to throw.

Long story long, J.R.’s debut rivaled that of anything the The Comedy Store cranked out in its heyday. He asked to perform first. He requested his teacher assist with his props. Who did he think he was, Gallagher? I can’t even believe I am typing these words. Yes the entire routine consisted mostly of knock-knock jokes, but I could not have cared less. Because he killed it.

Is there a moral to my story? Nah. Maybe I wanted to brag that for once, my kid isn’t someone’s punchline. Or a joke from God that went flat. Will Rogers once said “Everything is funny, as long as it’s happening to someone else.” The year of J.R.’s diagnosis, I didn’t laugh or smile once. Today, J.R. asked me if it would be awkward to give Valentine’s Day gifts to all of his girlfriends at the same time. Now that’s downright hilarious if you ask me.

Laughter may be the best medicine in my book, but ten years with J.R. has taught me that he requires no cure. He may, however, want a strong dose of Blazing Saddles.

Kristi Vannatta is a mom to two boys, ages seven and ten, and lives in South Florida.  Her blog, Write On!, focuses on her life with her ten-year-old son with autism.  In her infinite spare time (ha!) she runs Puzzle Peace Now, a charity that raises money to send children with autism to summer camp.