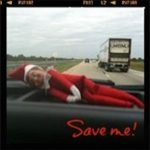 Christmas.  Oh joy.  Is it that time of year already?  Time to pray one of the 35,000 toys in the chain store look books catch my kid’s eye?  Time to run out and buy TWO of everything on my younger, typical son Jackson’s list in case my autistic son happens to fancy (a.k.a. fight him for) any of it?  Oh and there’s that all-nighter my husband and I pull on Christmas Eve that has us cutting off wires, tags, or anything else that would cause a toy to adhere to its packaging for more than 2 seconds, triggering J.R. to lose interest altogether.  And how could I forget my favorite chore- spending all of December diving toward the television to block any promos for The Polar Express.  Last year’s rigorous viewing schedule had J.R. scripting the movie’s lines until the end of March.  And you thought your holidays were hectic?

In all seriousness, J.R. “gets it” more and more each year.  Having a little brother who acts like EVERY DAY is Christmas does help.  On that note, I have to constantly remind myself that it is, after all, pretty unfair for me to water down the holiday just because J.R. may freak out a little.  Or pull the Christmas tree down…or rip open he AND his brother’s entire chocolate advent calendars in one sitting…or randomly scream (to strangers) “YOU ARE ON THE NAUGHTY LIST!!!!!!!!!!!!!!!!”

This year, in an attempt to gain some normalcy (ha!), I thought it was time to infuse a little tradition (to add to the tradition of hoping we don’t get invited to anyone’s home). I figured The Elf on the Shelf would be a good start.  Correction- after asking everyone I knew what HE OR SHE thought of the whole naming and hiding the elf crap and learning that most kids LOVE it, I decided that meant my kid would absolutely loathe it.  Then true to my masochistic form, I bought the pricey kit anyway- even after one friend described the process as ME having to play tooth fairy, 24 times in a row.  I must be brain dead.

My girlfriend Natalie, mom of two typical girls, wasn’t convinced either.  A five-dollar promotion and free shipping from Target quickly changed our minds, and we haven’t stopped laughing about our joint misadventures since.  Did I mention her elf arrived with a severe tan?  I digress.

My mother-in-law and I introduced the elf concept to the kids together one evening last week.  J.R. was pretty pumped, I have to say!  This may have to do with the fact that the little media whore naturally owns a coordinating website and stars in his own animated television special (which I had conveniently DVR’d).

After we finished thoroughly overstimulating J.R. by exposing him to all things elfin, I put him right to bed.  As dumb a move I know that was, J.R. complied.  However, at 3:30 a.m. I was awakened by  “Chippppppppppieeeeee, ohhhhhh Chippppppppppieeeeee, where are youuuuuuuuu? I know you’re around here somewhereeeeeeee.” J.R. had gotten out of bed and started looking for Chippie (the elf formerly known as Dinosaur Skateboard seven hours prior).  Shit! Shit! Shit!

I am ready to shelve the elf the eve of his debut.  Meanwhile, Natalie reported that theirs TOTALLY freaked out her younger daughter.  So uneasy about the thought of being “watched” by a miniature George Hamilton (ok I’m not sure that’s what they named their elf), she clung to her dad so tightly that he could barely manage to dress for work in the morning.  Funny!

J.R’s little brother, on the other hand, adored our Chippie and was to follow the tradition to the letter.  He also took it upon himself to enforce the elfin laws, particularly the one that suggests IF YOU TOUCH THE STUPID ELF ALL ITS MAGIC DRAINS OUT (or something like that).  Imagine my quandary- I have to keep our elf HIGH ENOUGH out of reach so that J.R. can’t touch it (hence voiding the magic and earning a punch in the stomach from baby bro) but not too high seeing as J.R will try to reach for it no matter what.  Case in point- one night I put Chippie at the top of our 9 ½ foot Christmas tree.  The next morning I spied J.R. hanging over the banister by his toenails reaching into the tree and whispering “just take my hand, Chippie.”  I secretly pray Natalie can beat my story.

Natalie’s latest elf encounter does not disappoint- the girls have noticed that their elf has a rather large manufacturer’s tag protruding from his buttock area.  They are ready to call bullshit on the whole thing.  I think baby Eva even used the term “scam.”  Natalie alerts me of this breaking news via text, and I receive the message en route to Disney World with the family.  Chippie is perched on our dashboard.

A bored and fairly concerned passenger now stripped of my electronic devices, I start to reach for Chippie to see if I can rip off his tag.  At that moment I envision Natalie’s girls demanding an explanation for George Hamilton’s exploitive ways, and my inner giggle turns to a snort.  A Christmas miracle ensues and my kids for ONCE look away from their ipads/itouches/i”broke”s and toward ME, right as I reach for Chippie.  Mortified, they start to scream, in unison “MOM DON’T TOUCH HIM YOU OR WILL KILL ALL HIS MAGIC!!!!!!!!!!!!!!!!!!!!!”

“OKAY!  OKAY! GOOD LORD!” I scream toward the back seats.  Yes, we’re a family of screamers.  My husband has no earthly idea what any of us are talking (screaming) about, and is so startled by the ranting and raving ABOVE the volume of Angry Birds that he takes a corner a little too fast.  Chippie is now airborne.  Well above all of our heads.  So what did I do then, you ask?  Well, I had to let the Chip fall where he may (or void his magic, along with my full bladder).  The poor dude was left face down in some crushed Goldfish crackers until I could rescue him once the kids were tucked in.  Quite the touching memory, right? I may very well find myself tearing Chippie limb by limb before Christmas Eve, but I have to admit that the little hell raiser did instill a tradition or two in me.  To begin with, I realized that I have just as much hilarious dysfunction in common with my friends who aren’t raising a child with autism.  Swapping elf stories with Natalie made me laugh harder that I had in weeks.  That’s enough to convince me to hold on to the Chip off the ol’ block until my kids are in college.  And never stop comparing notes with parents of neurotypical kiddos.

Though my little one was as serious as a heart attack about Chippie and his need to be left unmolested after those late flights from the North Pole, he actually got J.R. in the spirit!  They are still racing to find Chippie every morning, and even if J.R. sees him first, he gives Jackson the opportunity to crane his neck and find the elf on his own.  Sweet.  Jackson’s militant holiday tradition enforcement has apparently rubbed off on J.R.  Don’t get me wrong,  J.R. still WIGS when his little brother sings Christmas songs, but he also plugs in my Christmas lights, is asking Santa for a Polar Express train (duh!), happily tunes in to ABC Family’s 25 Days of Christmas series, and (as of right now) still wants to know where Chippie is going to end up tomorrow.  To the next cornball, merchandise driven holiday tradition I say BRING IT ON, and Merry Christmas to me!